Ultimate team building… a view from the van 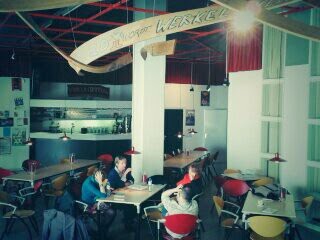 How do you build a network of wildly different organisations spread across a region of 6,000 square miles into a team of co-workers?
A snap shot of an EMPAF meeting would show you that there are not enough hours even in a day-long meeting for passionate people to get everything off their chest.  Everyone has so much to say, share and hear from each other – our UK meetings often end when people suddenly stand up and say “I have to be on the train at 10 past”, put on their coats and walk out.  Then everyone travels back to their part of the region thinking of all the things we didn’t talk about; how interesting it would be to get views on a pressing issue that wasn’t on the agenda.

What was discovered at ICAF 2011 was the space to explore anything and everything on people’s minds, and the content of the conference itself as a catalyst to brand new thoughts and ideas.  Well, so I was told – I wasn’t there; my colleague Jill Turner was the High Peak representative that year, and she came home with a twinkle in her eye and a spring in her step.  So the Caravan of Dreams was born at some point between then and 2013 when our planning began.  Taking that idea of finding the space to work together intensively, we now have four of us sharing a journey in a van (two in relay), plus the reinforcements of another three who have joined us.   And I have to say it has been such an honour to visit and be welcomed by so many wildly different and passionate workers here in Holland.  They almost feel like part of our extended network now and reflecting on their practice has shone a light on our own.

I’ve loved being in the van – Andy Barrett from Excavate talks in his blog posts about approaching each encounter with a sense of mischief.  Yes, having witnessed him leaving a food parcel by the door of the family who told us where to find the supermarket, I can attest.  His warmth and energy have made an impression on me and it is exactly this kind of close working which we have no space for back in the UK.  Millie Ferguson from the Core in Corby is a legend of digital knowledge – I have been quietly sucking up new information and loving seeing how someone does it properly.  Keeping up with technology is a major issue for a tiny organisation like ours, where I am the default IT Manager, but am entirely self taught.

Everyone at home thinks I’m away on the ultimate Jolly.  But we have worked till near midnight on most days, and with a sense of panic over the volume of footage shot, the photos to upload, the coordinates to plot on Empedia.  Now is the time to make sense of it all and get gifts for those at home who have planned so hard and supported us while here (yes, Amy Smith, that’s you, and Tony that’s also you and many more…).  ICAF 2014 starts today – so watch this space for the fireworks that sets off.